I'm a Scientist: Supported by Wellcome and UKRI
Skip to content

About I’m a Scientist

I’m a Scientist is like school science lessons meet the X Factor! School students choose which scientist gets a prize of £500 to communicate their work.

Scientists and students talk on this website. They both break down barriers, have fun and learn. But only the students get to vote.

This is the Particle Physics Zone. It has a range of scientists studying all different topics. Who gets the prize? YOU decide!

The Particle Physics Zone is funded by the Science & Technology Facilities Council. Their sites such as the Rutherford Appleton Laboratory, and contributions to CERN and its Large Hadron Collider detectors, provide facilities to investigate the fundamentals of particle physics.

All matter is made up of particles, and there are many types of particle. There are atoms which in themselves are incredibly small. An atom contains protons, neutrons, and electrons; which are also particles. Protons, and neutrons are made of quarks, now we’re looking at very small particles indeed; a quark is smaller than 10-19 m across (that’s just 0.000 000 000 000 000 000 1 m). Quarks are subatomic particles, which also include leptons and bosons — we've all heard of the Higgs boson. 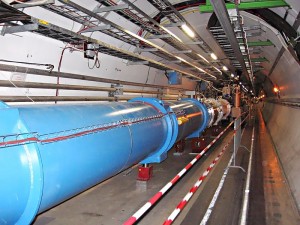 Recently, there has been a lot of excitement over work being done at CERN, on the Large Hadron Collider. Scientists have been looking for — and found — a particle called the "Higgs boson".

The Higgs boson is the particle which gives all other particles their mass. At the moment the universe was created, no particles had any mass; so they could all move around at the speed of light, almost immediately, something called the "Higgs field" was created. The Higgs field interacts with all other particles, and causes drag; heavier particles will move slower through the field, and lighter ones will move faster. The field doesn't interact much, if at-all with a photon — the particle from which light is made — and so this can still move very quickly. A photon has no mass, and can move at almost 300,000 km per second; the speed of light.

The Higgs boson is the particle which makes up the Higg;s field, and this is for what scientists have been searching.

The Large Hadron Collider (LHC) is the largest particle collider in the world. Protons are fired around the tunnel, which is a large circle with a circumference of 27 km; it needs to be this large because when the protons are travelling so fast — near the speed of light — they need a lot of space to move. A proton is quite a heavy particle, in the scheme of things, so getting it to move at this speed isn't easy.

When the protons crash together, they explode in a tiny flash of energy and quarks, and photons, and other particles are released. Very, very rarely, a Higgs boson will appear. This is what scientists have been trying to detect.

By detecting, and proving the existence of the Higgs boson, scientists have been able to prove the theory of why particles have mass. A question which has troubled science for decades.

Teachers don't need to book, and students are free to drop in and talk to the scientists.. If they have any burning questions or haven't yet experienced a live chat.